The folk of Lady White and Xu Xian

The folk of Lady White and Xu Xian (bái niáng zǐ hé xǔ xiān 白娘子和许仙) is one of the Chinese four greatest folklores. It reflects people’s recognition of love. The story goes like this: Taking the shapes of two women, White Snake (bái shé 白蛇), Bai Suzhen (bái sù zhēn 白素贞), and Green Snake (qīng shé 青蛇), Xiao Qing (xiǎo qīng 小青), toured on the West Lake (xī hú 西湖). A sudden heavy rain came at that time it sent everyone scurrying for shelter. When Bai Suzheng and Xiao Qing found their way, a young man holding up an umbrella protected them from the rain. The young man looked very handsome and gentle he was a local young scholar. Both Bai Suzheng and the young man flushed crimson with embarrassment when their eyes met together. They began to fall in love at that time. Seeing this, the clever Xiaoqing asked: ‘Thank you for your umbrella Sir, Could you tell us your name?’The young man replied: ‘My name is Xu Xian and I live in nearby the Broken Bridge(duàn qiáo 断桥).’ Then Bai Suzheng and Xiaoqin introduced themselves to the young man. 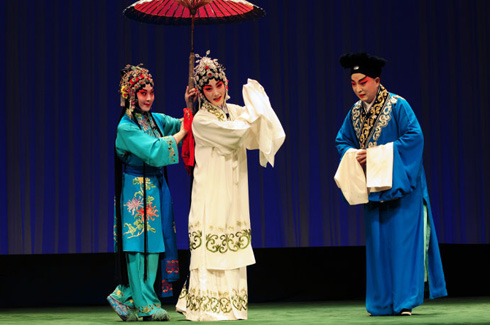 From that day, the three people often met together, Bai Suzheng and Xu Xian were getting along better and better, they soon married and set up business for running a drug store. The white snake was full of sympathy. The poor people were cost-free when they were cured of a disease in the drug store, therefore, their business get brisk day by day. And more and more patients went to see the white snake. Since she had a kind heart and often dressed in white the snake was called Lady White. 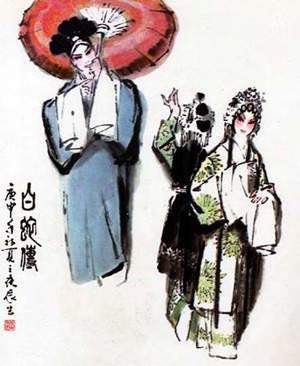 On a Dragon Boat Festival (duān wǔ jié 端午节), Xu offered an herb drink to White Snake. Resisting the effect of the herb in vain, White Snake turned back to a snake, which shocked Xu to death. To resurrect Xu, White Snake stole a magic herb from the Magic Mountain. With this herb, she brought Xu back to life.

Xu then went to the Jinshan Temple (jīn shān sì 金山寺) to thank god. There the monk Fa Hai (fǎ hǎi 法海) told him that the snake he saw on the Dragon Boat Festival was actually his wife. The frightened Xu was persuaded to stay in the temple. White Snake went to beg Fa Hai to return her husband to her but Fa showed no mercy on her. Desperately, White Snake fought with Fa Hai and summoned up a surging flood to Jianshan Temple. Unfortunately, she lost the battle due to the pregnancy.

After White Snake had given birth to a baby boy, Fa Hai arrived to capture her and put her under a pagoda. White Snake remained there until her son grew up, passed the officialexamination with high honors, and returned to beg for her release. Xiaoqing defeated the Monk Fahai and forced him to retreat into the stomach of a crab and helped Lady White out of the bottom of Leifeng Pagoda. From then on, Lady White was reunited with Xu Xian.